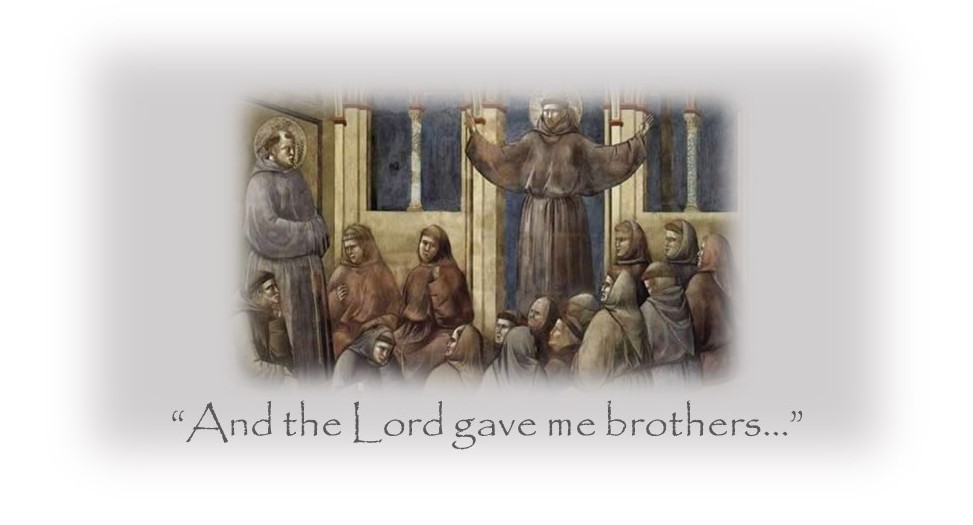 “Early in his apostolic life Francis became aware that Christians cannot be trained without community life.  So when, like a trail of gunpowder across Italy, there sprang up many Franciscan communities whose members were bound together by fraternal charity, these communities soon became known as fraternities.” From Face to the World, by John Francis Motte, OFM.

The vocation to the Franciscan way of life is lived in fraternal communion.  St. Francis referred to his companions as “brothers” in his Testament, when he writes “… the Lord gave me brothers…”   He found God’s Fatherhood as the source of this spirit of brotherhood, which unites all of us as brothers and sisters.

Members of the 1st Order (the friars) and of the 2nd Order (Poor Clares) live their vocation in communities referred to as “monasteries”.   Tertiaries, while “living in the world”, live their vocation also in fraternal communion.  Their community is called “fraternity”.

We gather in community on the 3rd Sunday of each month at St. Nicholas Byzantine Church in Barberton, OH at 1:30pm.   At our monthly gatherings we devote time for prayer, ongoing formation, business and fellowship.  Our life in fraternity encourages us to lead a life of love of God, love of neighbor and Christian virtues.  We are bonded together by our love of Christ and our firm desire to walk in the footsteps of the Seraphic Father who made Christ the center of his life.  The pastoral care of our Fraternity is entrusted to the Immaculate Conception Province of the OFM (Order of Friars Minor).

“In joining a fraternity we share the spiritual life of the whole Franciscan family.  By fraternal bonds we are united with the great and glorious giants of sanctity of the Franciscan Order.  The honor of becoming the brother of St. Louis, of the Cure of Ars, of Pere Foucauld, and other such saintly persons- to become the sister of St. Clare of Assisi, St. Joan of Arc, Margaret Sinclair- these are graces whose true value we shall know only in the next world.”  From Face to the World, by John Francis Motte, OFM.